Sunday the 7th of September saw Red sails reappear in Plymouth sound for the 5th and final round of the Gul SW Mirror traveller series 2014 combined with the Ullman Enterprise open at the Royal Plymouth Corinthian Yacht Club.

With the forecast promising a maximum of 4 knots of wind and settled weather, the race team discussed long and hard about cancelling the event on Saturday. Only on a visit to the race area was it found that a sea breeze had developed and it was hoped it would return again for the event the next day. So with a delayed start posted late on Saturday evening and emails and texts flying around the ether late into the evening, the fleet made their way across the border to Devon.

Arriving in the bright lights of Plymouth were the 9 visiting boats. 2 from Restronguet, 1 from Mount's Bay, and 6 from Looe. For five of these boats it was their first taste of a traveller event away from their home club, and they must be thanked for choosing this this event to support. With sounds of uncertain boat rigging ringing around the launch area, foils were reunited with there forgetful owners and everyone prepared for a slow motion day. This was only confirmed when at the briefing the race officer sounded more cautious than confident.

With the course being laid inside the sound to the south of Drakes Island the fleet launched straight into a strong flood tide that was to prove interesting all day, and made their way to the start area. With 6 kts of steady southerly wind recorded on the committee boat the PRO went into sequence for the first race and the Enterprises got away first time. The Mirror fleet, all within hailing distance of the line were next, but here was where the tide played it's first joker of the day. On the gun, the 2 Restronguet boats of Scarlett Shepherd & Harvey Martin and Martin Egan & Freddy Martin were a boat length behind the line and flying at full speed. Heading straight into the strong flood all they could manage was to sail up and down the line!

Scarlett & Harvey were eventually first over the start at GO plus 4 minutes, with the rest of the fleet finally managing to make some headway and following dreckly. The upwind leg set at a reasonable half mile suddenly looked an impossible target. But slowly, surely and with a little stronger breeze forming,the fleet eventually reached the windward mark and after several approaches Esther Bowdler & Scarlett Crago made it around first followed by Scarlett & Harvey.

The downwind reaches now tightened by the tide proved a test of how close you could fly your kite and  the two leaders extended from the pack down to a shortened course finish ahead of Joe Jackman & Jack Sargent in 3rd.

The sea breeze, now at its strongest of 8kts, made the second start a little easier with everyone managing to stay close to the line. Martin & Freddie made the best start from the pin, crossing the fleet on port. Esther & Scarlett were the best of the rest, holding station OCS and drifting back for the gun. With a course reduced in size the fleet worked their way out across the Sound and at the top mark it was Joe & Jack first around closely followed by Esther & Scarlett then Scarlett & Harvey. These positions were held until the start of the second beat where Esther took the seemingly favoured left side and overhauled Joe into the lead. Ollie & Archie Hawkins now finding the speed that favoured them at the recent Southern Areas popped out of the pack and at the windward mark rounded in second place. Again the places stayed unchanged downwind to the finish with Joe in third and Scarlett fourth. Martin finished just ahead of Amy & Chloe George leaving the battle of the Looe newbie's to be won by Mike & Freya Visick from Tom Langan & Tom McLaren and Lauren bowdler & George McLaren bringing up the rear.

With the race officer confident the breeze would hold for just a little longer and the tide easing up he decided on a short third race. With all 3 to count this was to prove interesting. The fleet more used to the current by now were all on the line at the start which left Esther (who was trying the drift down approach that worked so well last race) no space and was recalled. This meant she had to try and fight back up through the pack. At the top mark four boats rounded nearly together with Joe leading closely followed by Scarlet, Ollie, and Amy. Esther followed at a distant 5th after touching the mark and was being chased hard by Martin. The reaches down to the finish this time proved decisive with Scarlett just overhauling Joe to windward by the finish and Esther clinging on to the leaders in a distant fifth.

Fingernails were chewed on the way in and uncertain looks were common until at the presentation it was revealed that ONE point separated the top 3, and the event was decided on count back.

As a side note the enterprise event was won by N&G Mirror Western Area Champion Jeremy Stephens. 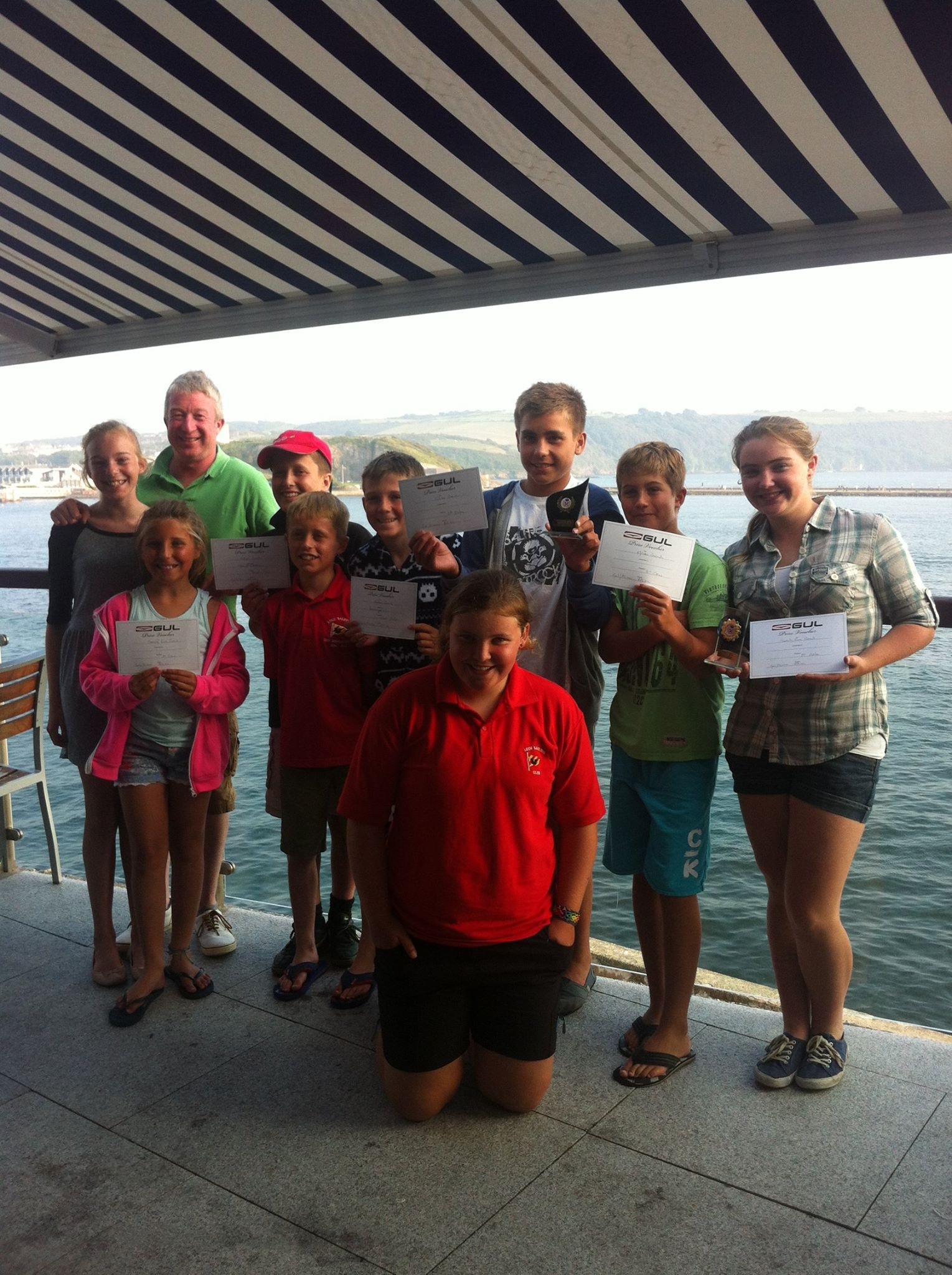 The final position in the Gul SW Travellers (2 events to be included, 5 events, 4 to count) is

Thanks go to Gul for sponsoring the south west traveller series and to RPCYC for hosting the event. Special thanks to Billy for organising the whole thing, Ade for his safety teams and Keith Kendall the PRO for getting three races on a day with no wind forecast. Thanks also to all the boats, crews and parents that have supported the series this year