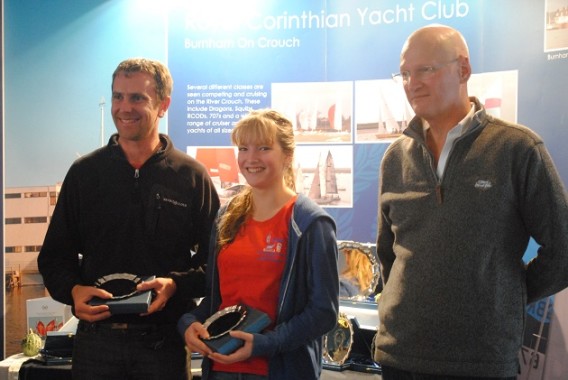 The Endeavour Trophy is an annual event that brings together all the National Champions from the different fleets that compete in their own National Championships. This year Reg from Beaver SC won the Mirror National Championship at Brixham to qualify for this prestigious event. Twenty Champions came together sailing a new boat, the Topper Argo, so the ‘playing fields were level’! It was going to be down to the skills of the sailors in the conditions that presented themselves over the weekend. The forecast was for good winds on Saturday but heavy winds on the Sunday. It wasn’t wrong!

Reg was the only female helm in the competition, sailing with Nigel Wakefield (Sarah Richards' brother), a very good sailor in his own rights, who had competed in this competition previously. He actually rang Brixham on the same day as Reg was crowned Mirror National Champion to secure his place as her crew. Between them they combined raw talent and experience of the sailing area at Burnham-on-Crouch, which is a tidal estuary.
The first day of sailing saw the competitors sail six races out of the eight race series, as the organisers were worried about the conditions forecast for the Sunday. By the end of the day Reg and Nigel were in 4th position overall having sailed very consistently. The evening consisted of a well earned dinner and then early to bed to refresh an aching body, after some very gruelling sailing.

From sunshine and a good breeze, Sunday arrived with a large drop in temperature and gusts of 28 knots! Reg and Nigel knew that weight wise they were going to struggle to keep the boat flat and powered up.  This was to be the case. The heavier crews performed better and Reg and Nigel had to be content with two, very credible, eighth positions, which dropped them to sixth overall.

The other sailors commented on Rachel’s extreme skill, professional composure and her consistent performance over the weekend. A fantastic accolade from some of the finest sailors in the country. Reg did counter this by paying a great deal of praise on her great crew Nigel. She stated “I have a sweat-shirt that says ‘Blood, Sweat and Talent’ on the front, I certainly showed that to be true this weekend!”

Interesting to see plenty of (ex)-Mirror sailors in the list. Matt & Toby sailed Mirrors at Poole YC in the 90's and 00's, Ian Dobson was National Champion in 2002, Holly Scott was World Champion crew in 2007 & Jeremy Stephens is 2014 Western Area Champion