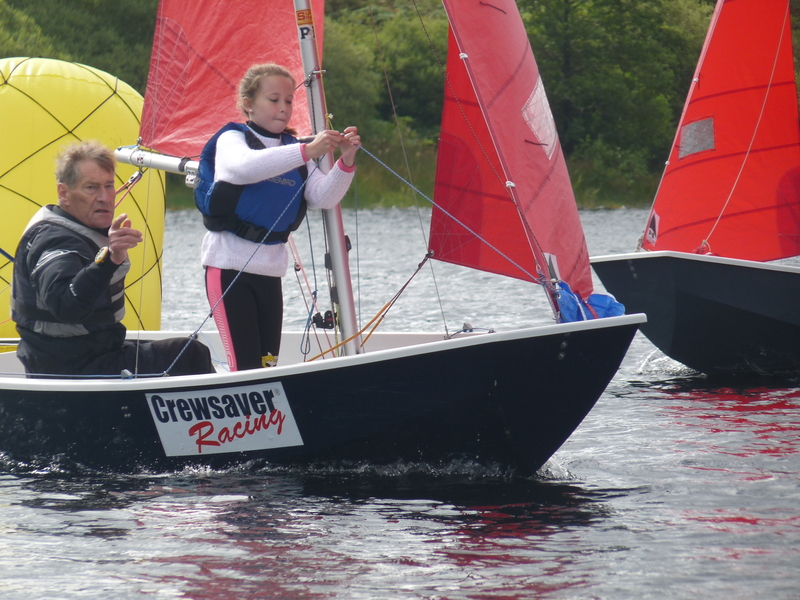 St Mary's Loch Sailing Club were delighted to welcome a large contingent of Enterprise sailors and travelling Mirror sailors from Scotland and Northern England for the 2012 Annual Regatta which, this year, incorporated the Scottish Mirror Championships. In total 23 Enterprises and 7 Mirrors took to the water and enjoyed two days of close sailing in some of the best sailing conditions of recent regattas.

The St Mary's weather, which is always difficult to predict, stayed true to the forecast for a change and Saturday dawned with a pleasant F2 breeze from the North which promised to build through the day. The fleet were able to demonstrate their upwind skills as the shifts kept everybody on their toes but, luckily, out of the water. Rescue crews enjoyed watching the skills of the top visiting sailors without having to fish too many folk out of the loch. The only real incident occurred when a St Mary's Enterprise lost its toe straps closely followed by the helm.

After a cool evening, Sunday dawned with less breeze and the promise of less to come. With the wind swinging to the East it was decided to hit the water at the earliest possible opportunity to make the most of the day. The final race of the day, and of the regatta, saw a few flat patches thwarting some crews but all of the fleet crossed the finish line before the loch turned into a mill pond.

Race officer, Scott Willoughby from St Mary's Loch, knew what to expect and took the precaution of laying two courses on Saturday morning. The first race course used the club marks to form a a starboard triangle from a start line at C up to a windward mark at E (D for the Mirrors), a wing mark at K and a leeward mark at B. By the end of the first race the wind had swung round to spoil the beat so the entire fleet headed up the loch to complete two more races round a port hand triangle using the regatta racing bouys.

Sunday saw the wind swinging to the East and so a short figure of eight course used a windward mark up above K, wing marks at C and L and a leeward mark at B. The courses all provided good racing for visitors and club members alike.

Having suffered the wet weather throughout the summer, the club fenced off the boggy parts of the field and managed to find reasonably dry camping spaces for all the overnight visitors. The cool North breeze kept the midges at bay which was a very welcome relief and so everybody was able to enjoy the best that St Mary's has to offer on a summer evening. The food was once again provided by the Glen Cafe who this year chose to present lasagne, garlic bread, salad, curry & rice and rich chocolate gateau for desert. The bar enjoyed a good brisk trade which certainly helped the ceilidh get quickly into full swing with everybody enjoying the classic dances without too many injuries although the commodore came of slightly worse for wear!

Following a welcome lunch on Sunday after the last race, the Scottish Mirror Championship shield was presented to veteran sailor John Hugo & his young crew Mary Ann McVey from Annandale S C. 2nd place and the singlehander trophy went to a newcomer to the Mirror travelling fleet, Roy Donn from Pentland Firth YC, and 3rd place to Austin Diamond from St Mary's. The Master's trophy went to John Hugo. The local team of Austin Diamond, Ian Brown and Norm Ellis took the Team trophy. This year, there were no competitors elligble for either the youth or junior trophys. It was noted that when the Championships were last held at St Mary's Loch in 2002, the winning helm on that occasion was a junior sailor who is now an Olympic silver medalist in the 470 class (Stuart Blithell, 2012 Olympics). John Hugo gracefully declined to put his name forward for Rio.

Everybody was thanked for a successful regatta and St Mary's warmly invites everybody to return next year for, hopefully, more of the same.