Sunday 29th April saw Derwent Reservoir Sailing Club host its Mirror Open Meeting. With a resurgence of Mirrors at the club it was time to test some of the practice and training that newcomers to the fleet have put in.

With the Mirror nationals at Ullswater in July and a host of juniors looking to transition, there was every reason to try out a Mirror for the day. A light North East breeze kept the competitors in the eight boats shivering most of the morning. Joining the club sailing for the day was the plan.

Conditions were very shifty throughout the day. Dave and daughter Olivia Coady in Wild Thing led form the start of the first race with brothers Oscar and Seb Shilling giving them a real run for their money. A close battle ensued between Luke Stewart & Pete Cowley and Ed Coady and Pete's big sister Abi. Ed and Abi pulled through and managed to to get past Oscar and Seb before the finish. Race two followed a similar format.

After warming up in the clubhouse, the fleet headed out again for two more races. The breeze increased slightly and the sun even came out at times. Dad Shilling and daughter Lizzie stayed on the left of the course during the first beat and arrived at the top mark with what looked like an unassailable lead. The rest of the fleet tacked up the right of the course looking for more breeze. There were limited place changes downwind but the next beat was difficult to read. With the wind swinging right again Dave and Olivia managed to pull past Dave and Lizzie. Ed and Abi finished third and Seb/Oscar fourth. The fourth and final race saw Ed and Abi get past Dave and Olivia in the final beat to take a well deserved win. 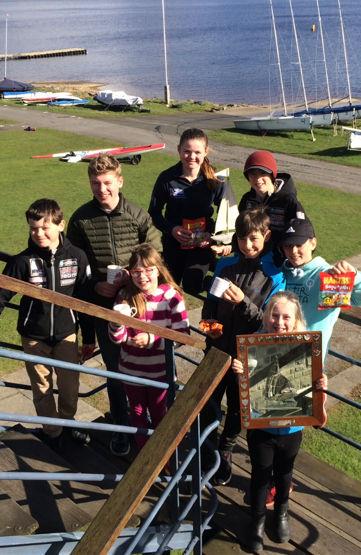 The prize giving took place under sunny skies. First overall were Dave and Olivia Coady in Wild Thing. The first visitor was Luke Stewart and Pete Cowley and Dave and daughter Lola Saunders won the prize for the first gaff-rigged boat.