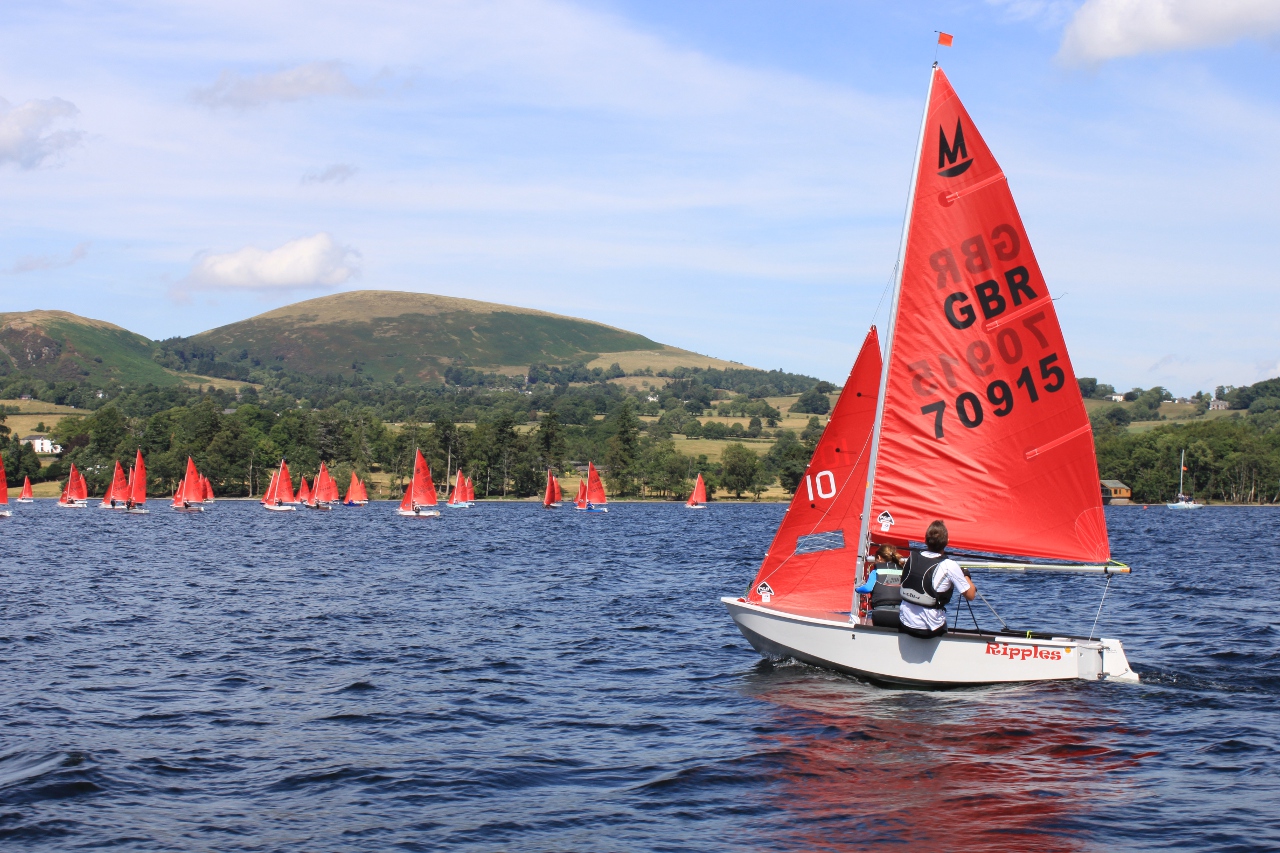 Ullswater Yacht Club in the Lake District provided the stunning holiday venue and excellent, family friendly, facilities for this years Mirror Nationals from Tuesday 24th to Friday 27th July. 44 boats entered, comprising 24 family teams and a staggering 62 related sailors. A fantastic mixture of adult + child teams competing against teams of older children, and it was a close run thing. Terrific to have an International flavour with Eoghan Duffy & Cathal Langan from Ireland and Alle & Anna Roodbergen from the Netherlands racing. Great to see a spread of experience representing 18 clubs from across the UK from sailors competing in their first Nationals to seasoned hands such as Olympic medallist Simon Hiscocks sailing with his son Louis.

Sadly Tuesday's 'Swallows & Amazons' raid & picnic had to be cancelled due to rain and a lack of wind, however, it did clear up after lunch allowing the early arrivals a chance for some last minute practice and a chance to get a feel for the venue.

Wednesdays racing, scheduled to start after lunch was postponed for a while to allow the breeze to fill in. It did, and the boats launched, at which point it died again. For the next hour and a half it came and went, shifting around, but never enough to get a race underway. In the end the Race Officer sent the fleet ashore, and then postponed racing until Thursday.

Thursday was a bit more like it with moderate southerly shifty breeze and hot sunshine. It took a couple of attempts to start the first race, but after trying a 'P' and a 'U' start, it got away under a black flag. Racing was close throughout the fleet and getting a good start was vital. The race team got three good races in with minimal delay, and the fleet was back ashore in the early afternoon, leaving plenty of time for the younger sailors and some of the parents to play in and around the lake. Day 1 results showed there was only 1 point between 1st and 2nd boats with the rest of the fleet close behind. After sailing there was the AGM and a BBQ on the waterfront.

44 photos (one of each boat) kindly taken by Frank Stewart on Day 3. Boats appear in ranking order, so you should be able to find your boat quickly. All 228 photos  taken by Frank on Day 3 are on our Facebook group. Competitors who want a full size version of the original(s) should contact Martin Egan.

On Friday, there was a cracking breeze, from a similar direction to Thursday with hot sunshine - champagne sailing conditions, with plenty of gusts to keep everyone working hard. Once again three races were run with minimal delay, and the fleet was back ashore in the early afternoon, to pack up before the prizegiving. When the results were posted, it was Chris & daughter Daisy Fuller from Hayling Island SC who had won, 4 points ahead of under 15s Ed Coady & Abi Cowley from Derwent Reservoir SC. Ex-World Champion Chris Balding and his son Alex from Island Barn SC were third. The 4th, 5th & 6th boats were all equal on points showing how close the racing had been.

Results in full (6 races sailed, one discard), showing Bronze fleet boats where they would have been (approx) had they been measured.

Prizegiving photos were kindly taken by Steve Lenney & Jenny Clarke. Competitors who want a full size version of the original(s) should contact Martin Egan. Thanks to Ami Lenney for cleaning the trophies that were returned uncleaned, and for organising the prizegiving.

There were spot prizes for all the under 15s sailing at their first National Championships.

There were books on dinghy racing, kindly donated by Fernhurst Books, who also publish 'The Mirror Book'. These were awarded to:

(Trophies in text were not returned)