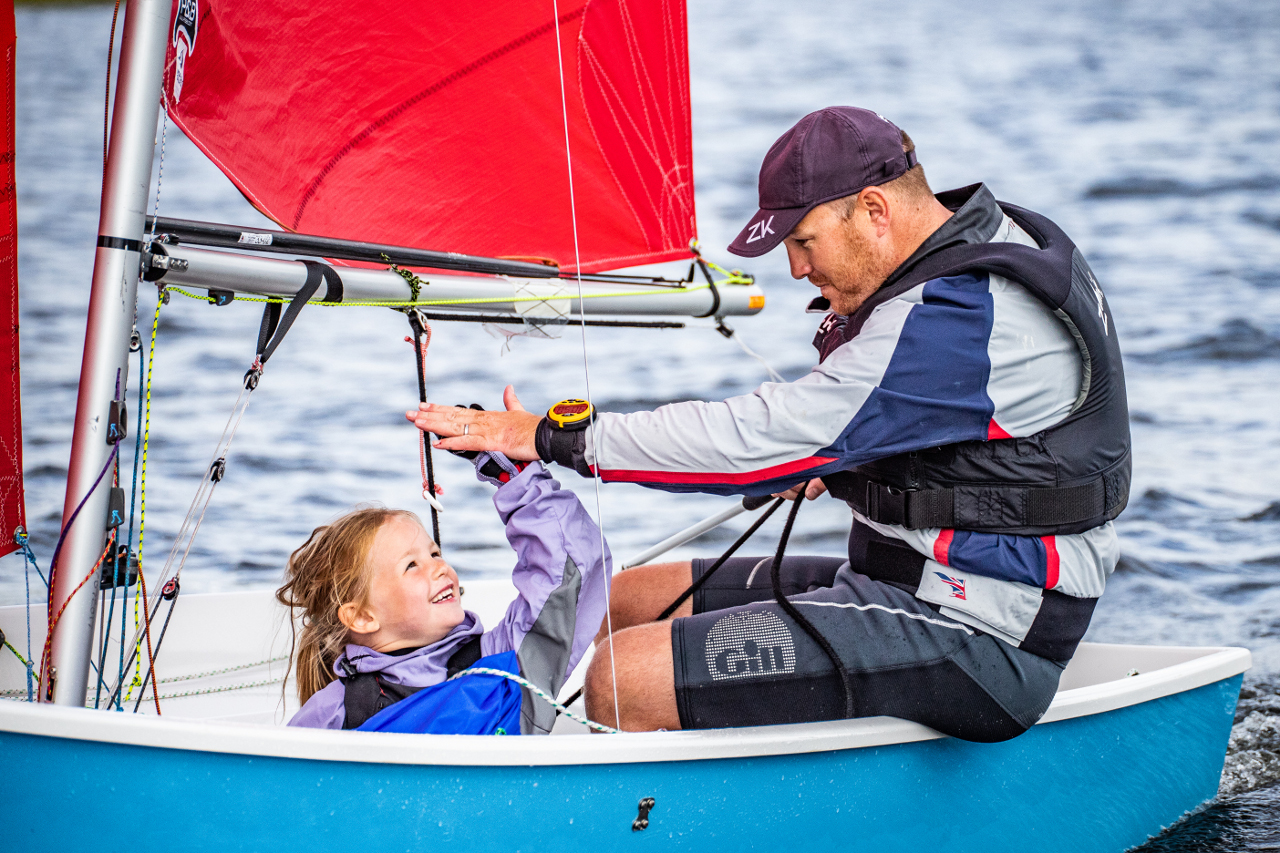 Mirrors go from strength to strength in the North. Following on from the MCA Nationals at Ullswater YC we have just had the 9 day Bassweek Regatta where Mirrors stole the show. There were 15 Mirrors in a combined Mirror, Tera ,Topper handicap fleet which saw just three Teras and Toppers competing but generally getting nowhere.

Monday’s Luffing Cup went to father and child pairings from Bass. The winner was Phil Smith with son Oliver crewing and second was his brother Andy with Lily crewing. Third were the Simpson brothers. In the Dubwath Cup on Tuesday morning Andy took the win with his elder daughter Katia as crew. We had a non Mirror interloper in second place and Jonathan Bullen (Bass) with son Henry crewing came third.

Then came the first Bass Bombshell! The Nairn pursuit race was based on the PY of each type of boat. There were 88 starters for the 100 minute race with its moving count back finish. And Mirrors were 1st, 2nd and 5th Overall: The Vials winning from the Simpsons with the Bullens backing them up. Young crews Charlie Exley / Erin Dawson and Katia Smith / Hannah Preston were also out competing. Could that result be beaten? Unlikely!

On Wednesday there was a two race mini-series and Fiona Spence (Ripon) with son George as crew took the class win from Jonathan Bullen sailing single handed and Phil & Oliver Smith. Alastair Duncan (Bass) with son Alfie was in the mix. Thursday morning’s race was won by the Vials from the Cooks with Luke Shaw & son Tristan (Budworth) third. Stacey & young Charlie Rowell, Phil and young Oscar Davenport, Paul Clark with daughter Evelyn and Charlie Exley (all Bass) were in the eleven Mirror fleet.

Did I say a better result than Tuesday’s was unlikely? I’ll take it back! The Thursday afternoon RNLI pursuit race with 64 entrants saw Mirrors in the three podium places. The Cooks took the outright win with the Simpson brothers again 2nd and the Bullens third on this occasion. Neil Cooke (Tewkesbury) backed them up in 12th overall.

Friday’s John Peel Tankard had 11 Mirrors in the class. Phil & Oliver Smith took the win from Paul Allen (Leigh & Lowton) with daughter Grace and the Spences. Wife Jude Allen with son Ruben were next up from Tim Smith (Bass). Other finishers were Izzie Cramp/Sam Jones (Bass), Peter Kassell/Tristan Shaw (Budworth) and, despite a capsize, Mik Chappell (Bass) taking time off from media duties.

The final weekend’s 4 race series went to Andy & Lily Smith from the Spence and the Bullen families. Stephen Kirkpatrick with daughter Georgina, Alaistair Duncan with young Matthew Somerville, Austin Daykin, and Jack Exley / Hannah Preston were all classified as finishers in the series.

I’ll leave it to someone else to count the number of Mirror helm & crew combinations. (Hope I haven’t missed anyone!) But it was an impressive showing – and especially the results of both the pursuit races.