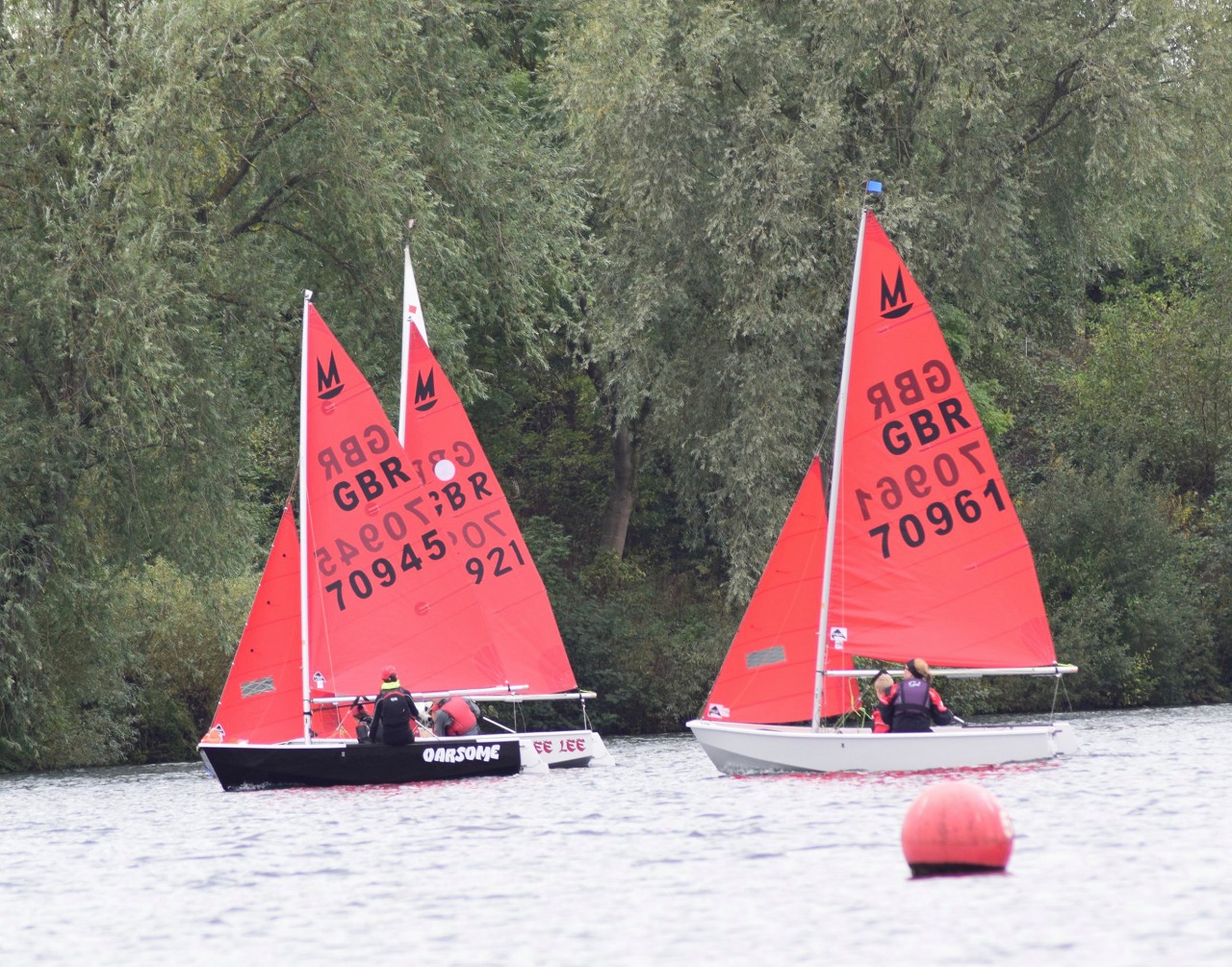 Ripon Sailing Club hosted its first Mirror Open Meeting since 2015 on Saturday 5th October, following a resurgence in Mirror sailing at the club over the last two seasons.

Nine Mirrors participated and demonstrated the range of boats that represent the Mirror class these days from a much loved 50 year old gaff rigged wooden boat to several new bermudan rig Winder racing machines. A full mix of age ranges was out on the water, with the youngest sailor aged 3 and the oldest a mere 81!

The Race Officer postponed the start of racing to give the wind chance to fill in; the meeting was being held jointly with the National 12 and Enterprise fleet open and all sailors enjoyed inspecting each other's boats and chatting while they waited. Race 1 was held in a light but building breeze and provided chance for all the Mirrors to compete across the fleet. At the front, visitor James Kemp, crewed by 4 year old Barnaby enjoyed a healthy battle with locals Fiona & George Spence and claimed first place. Stacey and Charlie Rowell sailing the newest boat in the fleet showed they had the boat speed to challenge. Further down the fleet single-handed sailors Judith Hart & Helen Voisey enjoyed close racing along with David & Oscar Manning and Liam & Mark Sutton.

Race 2 started without fanfare in a reasonably steady breeze and the top four boats of Spence, Kemp, Rowell and youth boat sailed by Tom Bates & Ollie Lumb rounded the windward mark first and started to pull away with spinnakers up. However, all four sailed the incorrect course and by the time they realised and corrected themselves, Voisey had got past into the lead and held it to the end of the race. Close racing between the four boats meant that despite the mistake, fun was had by all. Further down the fleet the Mannings enjoyed a tussle with a junior boat, sailed by Frankie Jackson & Leah Cowell and the Sutton family.

Race 2's antics meant it was all to play for in race 3 and Kemp deployed his (even more) lightweight crew Blaise and battle royale commenced between Rowell, Kemp and Spence for the top spot. Positions changed repeatedly and eventually Spences crossed the line first with Kemps just pipping Rowells on the line with Bates/Lumb challenging Voisey for much of the race to eventually take 4th place. These final race results meant that Kemps won the event on discard.

It is great to see the Mirrors becoming active again in the north and families introducing their young children to competitive but fun racing as well as youth partnerships developing double-hander skills and friendships. The event was also the last in the 2019 Mirror Northern Traveller Series which has also visited Derwent Reservoir SC, Dalgety Bay SC and Bassenthwaite SC this season. It is fantastic to report that over 40 Mirrors participated in this series which bodes well for the future of competitive family sailing in a boat that suits all ages and many different crew combinations. The overall winner of the Mirror Northern Travellers Series was Fiona & George Spence from Ripon SC with DRSC's Ed Coady & Abi Cowell/Sebastian Shilling in 2nd overall.