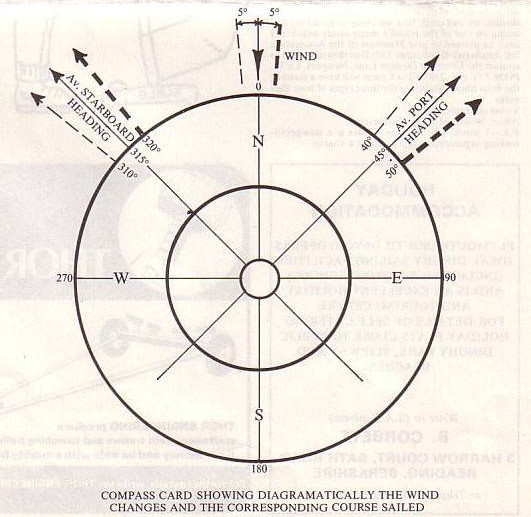 The use of a compass in dinghy racing has, in recent years, become an important aspect of the race. This is due to the relatively inexpensive compasses now within reach of the keen sailors. Once the advantages of a compass are known, it soon becomes a very important fitting with a boat.

The first thing to consider is what type of compass is best. I would recommend a compass that has the ability to be easily read when in a choppy sea, and does not require any intricate mounting blocks. For this purpose the compass dial should be about 3" (75 mm) in diameter. There are several such compasses on the market costing about £20.

Positioning of the compass within the boat is left up to the helmsman and can depend on the type of compass purchased. The foredeck on the Mirror appears to be the obvious position, where the helm can see the compass at a glance while watching the jib luff.

In this article I have assumed an Olympic type course with which I shall endeavour to explain the use of the compass.

BEFORE THE START
Quite often a long offwind sail to the Starting area is required. This time should not be wasted. Place yourself upwind of the rest of the fleet so that you obtain clear undisturbed air. Then sail a steady compass course and keep a look out for any regular change in wind direction, or any other irregularities such as wind bends.

Once in the start area you should go on a close hauled starboard tack, say, for about ten minutes. You will probably obtain maximum and minimum compass readings for your heading, suggesting that you have sailed through “lifting” nd “heading” shifts. You now tack on to port and check these variations. Note: It is not necessary’ to do any sums,just tack and take the reading. It will be found that a Mirror in general tacks very close on 90°.

Having now obtained a mean reading for either tack you should be prepared for the race.

Let us say for explanatory purposes that the wind has an average northerly direction. On starboard your headings were found to vary between 310°—320°, the average being 315° (or for easy memory NW.). On port your headings average out at 45° or NE.

THE START
For the first few minutes after the start your prime objective is to get away in clear wind. Only when you have clear air should you look at the compass and see whether the readings are in agreement with that taken before the start.

UPWIND SAILING
Let us assume again that you are on starboard with a heading of 310°. You now know immediately that you are on a bad tack—a header. You must tack off onto port as soon as possible and you will find yourself on a good heading of 40°. A few minutes later you sense a header, so you check with the compass and find you are now on the average heading of 450 It is now decision time! You are faced with three options:

Nevertheless, let as assume you sail on, and a few minutes later you are headed again to a heading of 50°, say. You must tack immediately, hence you Imd yourself once again on a good heading of 320°—a lift.

You should now be able to see the basic principle behind the use of the compass up wind but it should be emphasized that you should not sail strictly by the compass but remember the major part of the beat is dependent upon your own judgement. The compass should only be used as a check to tell whether you are on a “lift” or a “header”.

OFF WIND SAILING
In general there is not much use for the compass on these legs as the “wing” and “leeward” marks can usually be seen.

LEEWARD MARK
After rounding the leeward mark, check with the compass to see which tack is favourable. Let’s say, for example, you leave the mark to port and you sail a close- hauled port tack. Your compass heading reads 50° telling you immediately that you are on a “header”. You now have to decide whether or not to tack off onto starboard or sail on, which again is a decision beyond the scope of this article. It may be worthwhile to note that a short 25 metre tack could be very beneficial for when the wind swings back and leaves you on the best side of the lift with respect to the boats below you. On the other hand if your heading was 40° it would pay to stay on that tack knowing that anyone who tacks off onto starboard would be on a bad header and would consequently lose out.

To illustrate the use of the compass I have used a simple oscillating wind and you should note that in practice this is not so straightforward. The following are some situations which regularly happen and are worth thinking about before you encounter them!

In conclusion you should use the compass with care, constantly assessing the situation. Beware, too much systematic tacking sometinies leads you the wrong way up the beat. The compass is an aid to racing and not a tool to race with.

Editors note: This article is from Reflections, I've not worked out which one yet.