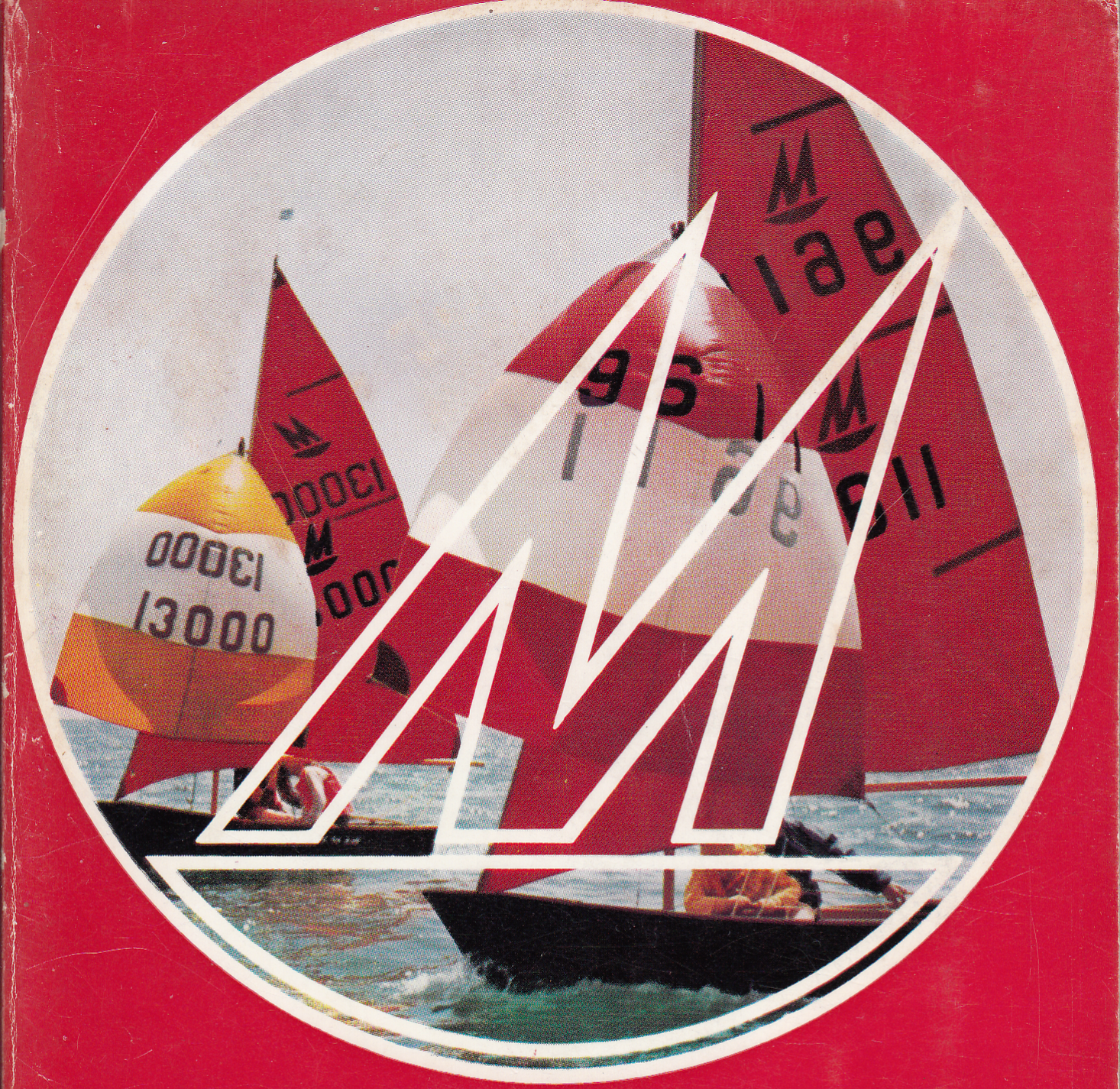 National Sailing Contest To Be Held At Newquay

LIMITED TO TOTAL OF 100 CRAFT

The 1968 sailing championships of the Mirror Class which with 11,000 registered boats in this country alone, is probably the largest class of sailing dinghies in the world, are to be held at Newquay in the first week in September. It is expected to attract between 350 and 460 sailing enthusiasts to the town. and a total of 100 red-sailed Mirror Class dinghies in to Newquay Bay.

Because of the accommodation available at the Harbour the entry has been limited to 100 craft and nearly that number of entry forms has already been applied for and sent out. More than half of these have been returned, booking places for the dinghies on South Quay Hard and cars on the Whim car park, both of which have be placed at the disposal of the organisers for the week.

One the main difficulties which faced the organisers was that of finding accommodation for receptions to be given to competitors and their families during the first week in September. With Newquay's comparatively long season, all the larger hotels were unable to cater for the three such events which are to be arranged—one by Newquay Urban Council, another by the Mirror Association, and third by the host, Newquay Sailing Club. It was only during last week that Newquay's publicity officer. Mr. Donald Macintosh, was able to say with fair certainty: "The Council and the Mirror receptions will be at the Blue Lagoon Ballroom, with the full co-operation of the proprietor, Mr. Harry Coster."

Newquay Sailing Club has decided to arrange a Cornish Pasty "At Home" in the former Territorial Centre, in the words of the secretary, Mr. Des Lewis, "To provide a contrast to the champagne and caviar.” Mr. Lewis said this week that he is delighted with the way in which entries are coming at this early date. “We have had as many as 14 entries from a single club," he said, " this being the International Publications Yacht Club, and there are plenty coming in from Cornwall.

“Few of the senior members of Newquay Sailing Club will be competing because they have in the main been allocated major roles in the organisation of the event, but we are hoping they will still have four boats sailing."

The week's competition will be over a three-mile course and each day’s points will be added up at the end of the week to decide the championship. "It will present a wonderful picture with these 100 dinghies in the bay, all with their red sails." said Mr. Lewis. "and it will be a great thing for Newquay from the publicity and prestige points of view.”

This appeared in the Cornish Guardian Thursday 8th August 1968, page 1

The Mirror Class National Championship 1988, biggest sailing event ever to be held In Newquay, is scheduled for next month, and has already attracted about 80 entries with a limit of 100.

Boats have been entered from all parts of England. Scotland and Wales. There is a good entry from Cornwall itself—seven from Looe, five from the Mayflower Sailing Club of Plymouth. three from R.A.F. St. Mawgan, and nine from Newquay Sailing Club in spite of the fact that many of Newquay's members will be officiating at the championships. Seven boats have been entered from Cornish schools.

The honour of providing the committee boat has fallen to Mr. Brian Morris and his motor craft. The Trevose. and Mr. Ernie Radford is to be OD (Officer of the Day) for the whole week. In addition to providing several officials for the championships. the Newquay Club has the responsibility of providing as many as 56 prizes in addition to the nine trophies provided by the Mirror Class Association, and up to this week 27 businessmen in the town have presented prizes. Said the local secretary, Mr. Des. Lewis, "And splendid prizes they are."

On Sunday the Newquay club tried out the course with an open Mirror meeting, with races morning and afternoon for a trophy presented by Mr. Norman Anstis. It was a meeting which was intended to be a rehearsal for the championships themselves and it was a most useful rehearsal In that It discovered a number of snags which might otherwise have been found in the championships themselves. Looe took away the trophy and the Newquay organisers gained some useful experience.

The story of the event was recorded by daily reports in the Daily Mirror Newspaper, so report text is © Trinity Mirror, permission to reporduce here applied for.

By Jack Lewis. This appeared in the Daily Mirror, Tuesday 3rd September 1968, page 5

Two schoolboys won the opening race of this year's Mirror Class dinghy National Championships at Newquay, Cornwall, yesterday. Petroc Dan, 16, from East Looe, crewed by his 15-year-old brother Enys, won the Marlow Plate in their boat, 5960 'Keryth', which they built themselves. Second was Peter Barnes, 31, of the International Publishing Corporation Yacht Club (IPC YC), whose boat, 1981 'Boar', was crewed by 13-year-old Hilary Taylor.

This appeared in the Daily Mirror, Wednesday 4th September 1968, page 5

A starting line infringement robbed the teenaged brothers, Petroc and Enys Dan, of a chance to win yesterday's race in the Mirror Class Dinghy National Championships at Newquay. The brothers, from East Looe, Cornwall, won Monday's opening race. Yesterday's race was won by the Nottingham couple John and Lesley Taylor

This appeared in the Daily Mirror, Thursday 5th 1968, page 5

Two teenaged brothers. Petroc and Enys Dan, of East Looe. Cornwall. yesterday won the fourth race in the Mirror Class Dinghy National Championships at Newquay. Cornwall. The brothers, in their boat 5960 ‘Keryth’, were racing for the Peter Wilson Trophy. They beat runners-up John and Lesley Taylor by two seconds.

This appeared in the Daily Mirror, Saturday 7th 1968, page 5

A yachtsman and his wife turned up trumps in their Mirror dinghy, 'Ace of Clubs', yesterday. Mr. John Taylor crewed by his wife Lesley. won the National Championship of the Mirror Class Association at Newquay, Cornwall. Mr. Taylor, from Nottingham, also won the championship in 1965 and 1966.

Editors Note: We only know the first two places (from Past & Present Mirror Champions). I don't know what scoring system was used, so just race positions recorded.

There is a photo of Mirror dinghies on the harbour beach at Newquay on the Mary Evans Prints Online website which I think is of part of the fleet rigging prior to racing (sadly it would cost us £40 + VAT to purchase the rights to display the photo here). It was supposed to taken by Andrew Besle (who normally shot in black & white, so this may have been colourized), Mary Evans date of 1980s is, I think, wrong (there were no Mirror Nationals at Newquay during the 1980s, and even if there had been some Mirror event at Newquay, the lack of trolleys, metal masts and the boat numbers just looks wrong for an event held in the 1980s). The orange boat is 14 'Mimi', the light blue boat name ending ‘….nta’ could be 6590 ‘Pinta’, boat with sail number ending ‘nn011’ white hull with black graphics I’m pretty sure is 11011 ‘footloose’. 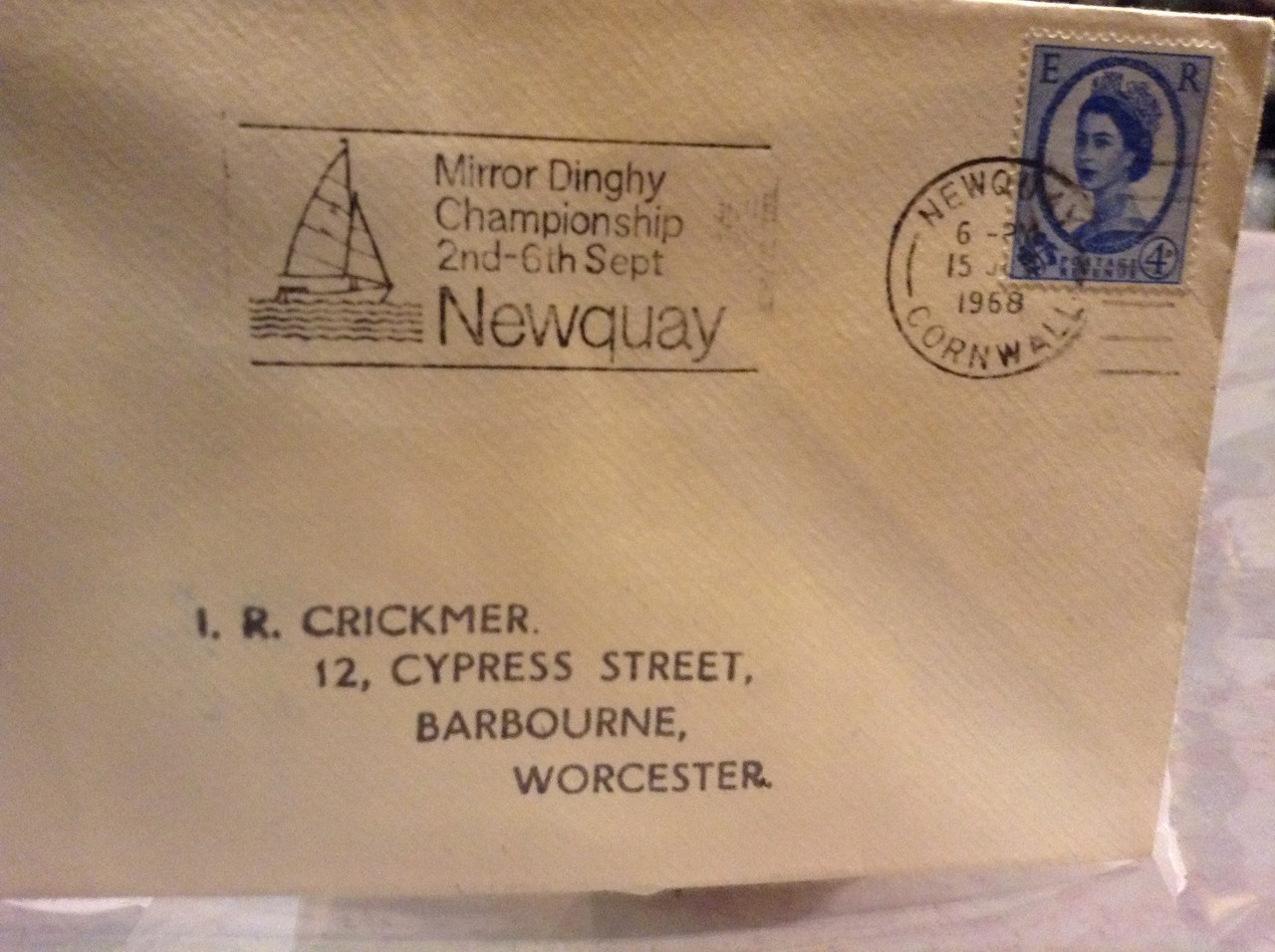 Editors note: This photo of an envelope with a franking mark commemorating the event was taken by Stuart Burnett‎.

The report below appeared in the Cornish Guardian Thursday 12th September 1968, page 1

Only Redwings and Enterprises sailed in a depleted fleet at Looe, as Mirror Class dinghies did not race at the end of the national championship week.......

........A "Welcome Home" was given to the returning Mirror Championship competitors by the club Vice Commodore Mr. H. Richards and senior club members in the clubroom on Saturday. The Looe youngsters were told they had maintained the high reputation of the Looe Sailing Club. and given wide publicity to the name of Looe.

Editors note: The Daily Mirror reports refers to Petroc & Enys Dan's boat as 'Kerwyth', but the Cornish Guardian refers to it (in other reports) as 'Keryth'. Since 'Keryth' is a cornish word (e.g. "Mur ras! Fatel a’n keryth ytho?" meaning "Thanks,....how do you like it then?"), I'm going to guess the Cornish Guardian is correct.