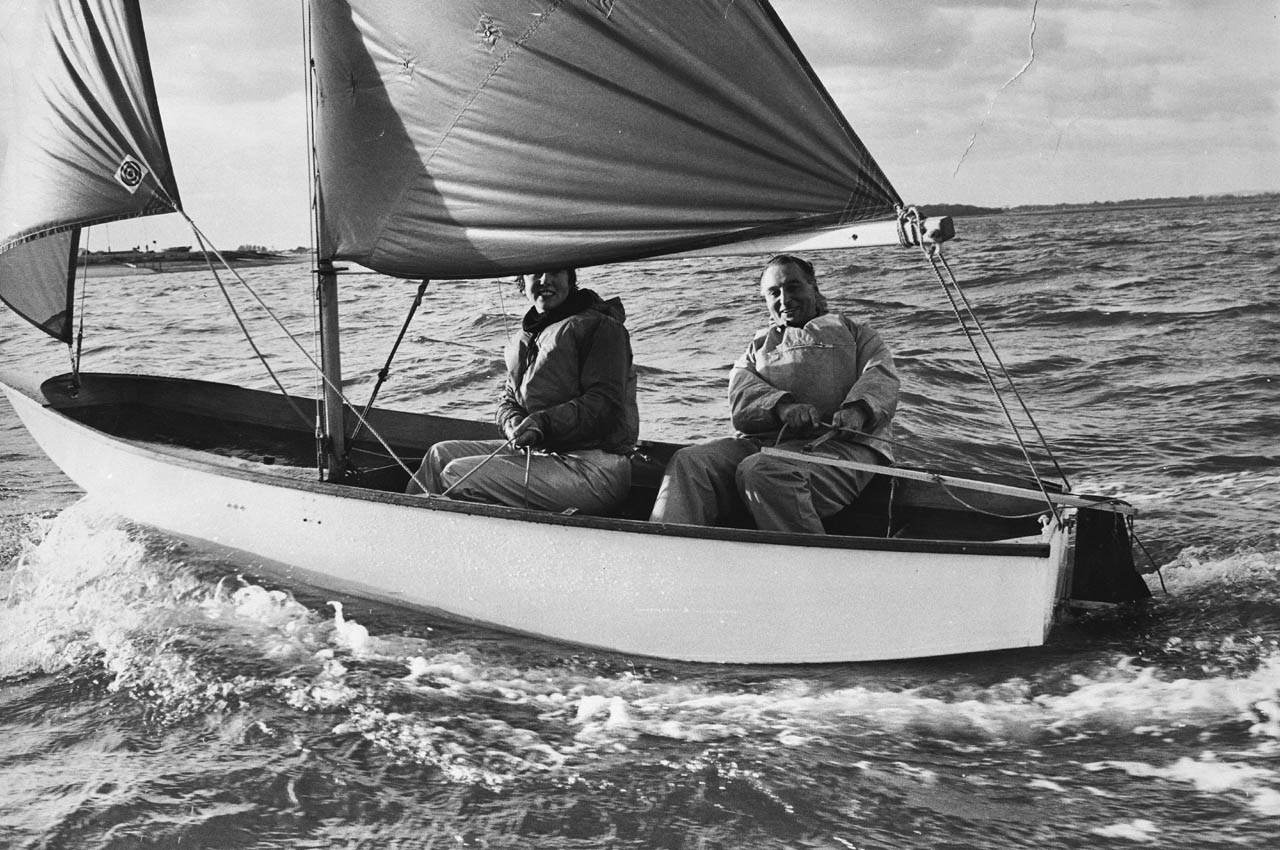 I suppose it was really in a Pub in Ealing. For six months I had been slaving and growing ulcers to keep the Bucknells House programme on the TV every week. I was mostly designing the built-in wardrobes, kitchen cupboards and so on which I was building into the Ealing house I was converting. These were usually designed, the building instructions written and the building completed just in time to be rushed over to the house before I and the cameras reached that particular point in the recording — hence the ulcers.

But in the middle of this I had to turn to boats, since my youngest son, considerably junior to the other two, was demanding one. We had by then sold the Y.W. utility pram on which the other two had learnt to sail. We tried to buy it back but failed. So. with Television vaguely in mind, I set to work on a new idea which I hoped would simplify boat building and avoid all the bother of setting up frames. I had been very impressed by the Ken Littledyke canoes I had shown on the programme and by the stitching and taping he had developed, with Geoff Waple of Automobile Plastics producing the tape and resin. The Phoenicians and the Vikings, also had a go at the sewing, but must have cursed not being able to lay their hands on resin and glass tape. Anyway, I carved out suitable shapes in thin plywood and just could not believe how easily first the model and then the lift boat (fixed by the size of the workshop I had available) went together, and this is where we go back to the Pub in Ealing.

It was here that the producer diverted the attention of a Mirror feature writer who was there, at the time, from the house to the boat, and as boats had just come out on top of the list of expanding leisure activities, he didn't need much diverting. In the meantime the boat was put into service, did everything it was intended to do, sailing, out boarding. rowing, and was entered for the Falmouth week under the hopeful number M.1.,which it still retains.

Meanwhile, back at the Mirror, David Cole, a keen dinghy man and Flying Fifteener, had checked and discarded all other possible boats, and had come back to me to make a 12 footer, which I did, but he decided to go back to the original 11 footer. He then asked the Circulation Director Mr. Atkins to try this out. I said "You will find it goes beautifully on the roof of your car," "What, on my Rolls?" he said apprehensively. I could see his point, so, on my old jalopy, it went to the Thames where Mr. Atkins kept his fifty footer. I think in spite of the contrast he appreciated the little eleven footer and could see its possibilities. so the Mirror decided to sponsor M.1. The meeting in the Pub was one of those moments that mould or at least stitch and glue history and now another occurred.

Bernard Hayman, Editor of the Yachting World, an associated magazine, said to the Mirror, "You really should not be sponsoring a boat without the help. which we shall be very glad to give, of Yachting World which has launched a thousand ships, and most of all Jack Holt who has launched tens of thousands more." Anyway, I had sailed for years with Jack Holt at Putney. Had owned two of his Merlins and two Hornets, 5 and 400. (I think I worried Jack when I built 400 without a transom, the first boat to dispense with a transom, but he forgave me when it worked). Anyway, I was delighted when we were both asked to produce a joint brain child based on the original M.1. prototype. I had to work hard to persuade Jack that the construction which had produced such a light and economical boat with more than usual buoyancy had really worked, and Jack's pithy comments can be imagined! M.1. had some obvious short comings. Rather over obsessed with making it an easy boat to build. I had cut the lower panel from one sheet of plywood, which produced somewhat unfair underwater lines. Jack promptly cut this in two and was then able to build his familiar genius into the shape, without which the boat would not have had its outstanding success. I was sad to lose the much smaller bow transom which I thought was rather elegant but the increased forward buoyancy was a big advantage.

I think it was Beecher Moore, Jack's partner, who said we ought to scrap the bermudan sleeve sail on the alloy mast, and go back to a conventional gaff rigging and I think he was absolutely right. Beecher has an unerring judgment for fitting boats to people. He is the only person I know who has crewed as an amateur in a J class Americas cup challenge (Endeavour had a mast 160ft high, sail battens like planks of wood and a 15,000 sq. ft. spinnaker!), or who has won everything on the Thames with two Trapezes on a Thames rater. He has, of course, started off numbers of well known classes mostly designed by Jack, and ensured their popularity with his administrative genius as Chairman of the Association. I've heard him say "Under every Englishman's skin is a love of horses and boats, but as he can't get a little horse, he had better have a little boat." So whilst Jack was building the new little boat,

Vic Shaw practically took up residence at Putney, where, with his customary zeal, he  was learning all about gunwales and inwales and hogs and chines, and then unlearning it all in order to write laymans' instructions. 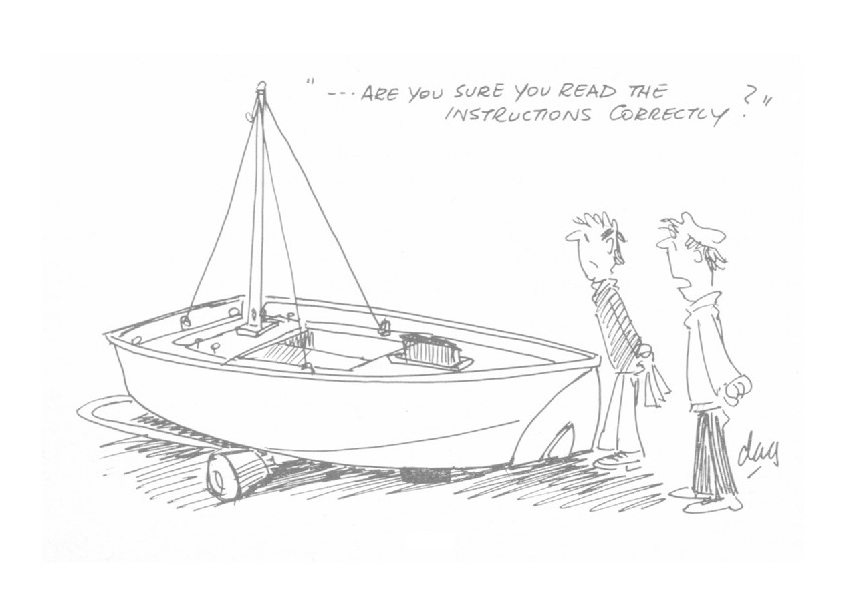 At this time, Searson Thompson and Ivor Finn at Bell Woodworking, with more experience than anyone in this field, were working out the details of the kit and making their own contributions as they always do to any boat they take on.

To see if anyone, with no experience and no garage, could build a Mirror, I produced a makeshift building shed by flinging a sheet of Polythene over hoops of 2ft x 1ft timber stuck into my lawn. This was promptly blown down, but with the addition of two guy lines it stayed up and the kit and instructions were handed to a student whose hands had never touched a screwdriver. It was the worst winter in history. Snow piled up high round the Polythene igloo, but with a tape recorder and electric fire going full bore, Mirror No. 3 was built and looked remarkably good. In fact, I subsequently toured Scandinavia with "Dingbat III". Some time later, standing 7ft tall on the roof of a car, it was driven into a 6ft garage. It even survived this and is still going strongly which proves a Mirror's versatility. 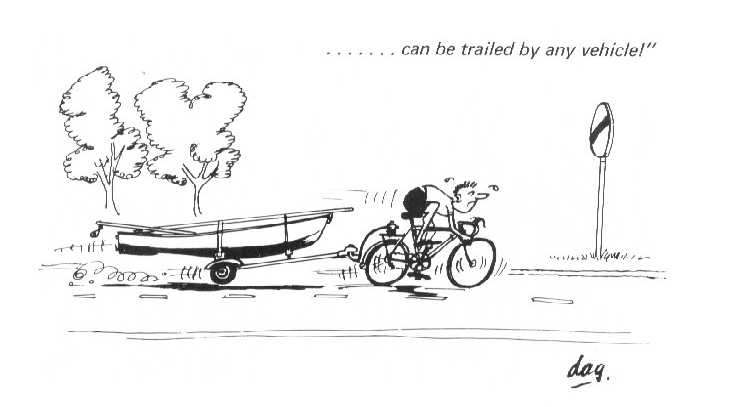 Eventually, with the usual scramble, the Mirror arrived at the Boat Show only to be thrown out — or very nearly. The Express, perhaps naturally, objected to another newspaper breaking into its very own show. However, a compromise was agreed in the shape of a piece of paper
pasted over the "Daily" so to its advantage the Mirror emerged with a shorter name.

It's Television appearance was dramatic. Sometime previously Jack and I had built an Enterprise called "Short Cuts," on a series of the same name which I was doing. The things I remember most about the Enterprise were my fumbles with the Champagne cork which, as Jack and I must have dragged our feet a bit, nearly got us faded out before Sylvia Peters named the boat (it was a live programme) and also the very dicey sailing with Jack in a gale of wind and blinding snow storm (before wet suits) after the launching ceremony on the Thames, whilst they tried in vain to free a rope from the propeller of the Camera launch. The thing I remember most vividly about the Mirror programme was the feverish rehearsing in my basement whilst I dragooned two beautiful maidens with copper wire practically coming out of their ears to produce a recognisable Mirror in three minutes which they did very impressively. The Mirror was, of course, the ideal boat for this sort of demonstration but I very much doubt if many Miss World's would have succeeded. 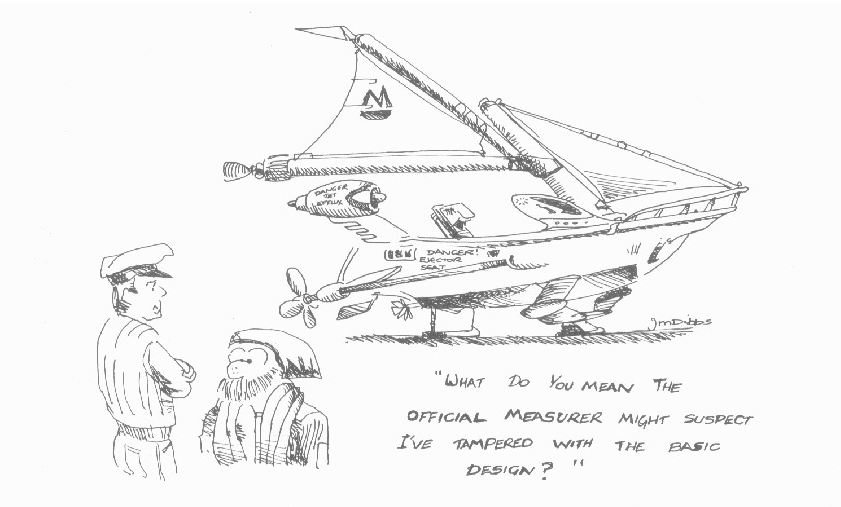 One feature of the design owes its origin to a great individualist — Bill Beecher — who, totally undeterred by the one design aspect, carved a beautiful sea-horse on the bow and fitted a stowage department behind the foredeck when he built No. 28. It was decided that we would have to forego the seahorse but that we couldn't do without the stowage. In fact every change, and there have been very few, has had to be thoroughly justified on the grounds of expense.  Without names or packdrill, we all know classes that have started as simple Do-it-Yourself boats and have ended up as a mixture between this and complicated, expensive racing machines. The Mirror has fortunately avoided this trap and for directing its course so successfully, all 40,000 owners owe a tremendous debt, not only to the department of the Mirror whose enthusiasm has never flagged, but also to the dedicated incredibly hard working and statesman-like Mirror Association Committee with its indefatigable Secretary, Sally Karslake. I do not think I have been a member of a Committee that works so effectively.