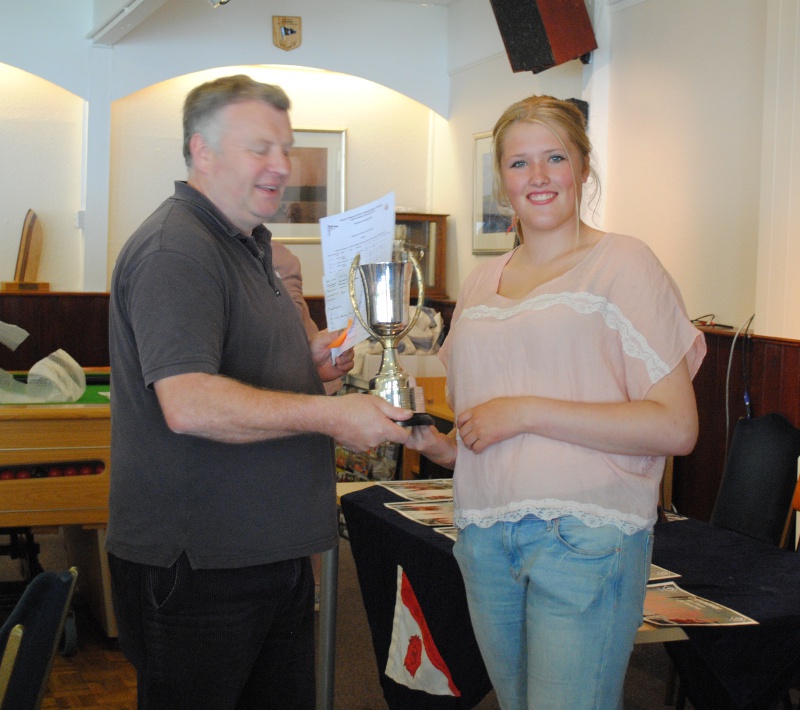 For the second year running our Inlands were hosted by Northampton Sailing Club, where we have been greeted by a great attitude and good hospitality. In total we had 19 boats, 4 of which were single handers, so in total we had 34 competitors and their families.

Saturday was very light winds, yet we still managed to get in two races in despite the very challenging conditions with big changes in the wind direction. The first race got underway at around 12, the wind was just enough to get us round the course in about an hour. The first beat saw Midge and Harriet Watkins approach the windward mark first, followed by single hander Emma Grayson, Andy and Tom Smith and Sarah and George Richards were all close together fighting for the wind. With it being light winds and only one person in the boat, Emma managed to pull away from the fleet, but not for long, as the wind filled in from behind the rest of the fleet started slowly creeping up putting the pressure back on and made the race much more exciting. Rory Mackenzie and Harvey Martin then took a different way up the beat closing in on the leading boats applying more pressure, likewise Edward Grayson (another single hander) made his way up through the fleet finishing fourth in that race, closely followed by Milly and Nick Pugh who finished 6th. The top 5 boats in that race were, Emma Grayson 1st; Andy and Tom Smith 2nd; Sarah ad George Richards 3rd; Rory Mackenzie and Harvey Martin 4th; Edward Grayson 5th.

The wind unfortunately continued to fizzle out as the day continued and dropped to barely nothing for the start of the second race, Lindsay Haig got an excellent start with full speed and a brilliant position which he managed to maintain finishing third overall in that race. However Sarah and George Richards stole the show and headed off into the distance after the windward mark leaving everyone behind, until… Edward Grayson caught some wind managing to close the gap however Sarah was having none of that and managed to win the 2nd race, followed by Edward Grayson. Rory Mackenzie and Andy Smith also had a good battle and a very close finish on the line but Andy did managed to take 3rd with Rory right behind with a 4th and Milly and Nick Pugh taking the 5th place. Unfortunately the two races that were also scheduled were postponed until the next day as the wind was not enough to set a course or start the race.

Sunday saw a much better wind which thankfully was rather constant. The first race was on time at about 10 and it was a clear start with no re-calls. Milly and Nick Pugh were first to the windward mark, with spinnaker flying in a matter of seconds-very impressive. They were followed by Andy and Tom Smith and Emma Grayson. Andy took the lead after the first few legs but then on the beat, the wind shifted slightly meaning it paid up one side resulting in Emma sneaking in on the last beat to win the race. The 2 races in the morning were back to back so as the last boat finished we started another one Emma Grayson lead from the windward mark however Andy Smith and Edward Grayson caught up in the next beat where Edward Grayson took the lead and won the race with Emma Grayson right behind him in 2nd.  Eleanor Bellfield and Jess Jarman were lying sixth after a very good race and excellent sailing, however, due to a very unfortunate toe strap malfunction slipped back, otherwise that would have been a very good finish for the girls. Rory Mackenzie and Harvey Martin also had a small problem as they were both working hard hiking out, until, suddenly the wind completely went and their boat came on top of them causing them to capsize to windward and totally invert. However astonishingly they managed to not lose any places finishing 9th. Finally the last race got underway at one o'clock but because of all the eager sailors had to be recalled as most were over the line. Rory Mackenzie and Harvey Martin lead from the windward mark until the very last beat when the wind started circling and became very difficult to predict which resulted in Andy and Tom Smith and Milly and Nick Pugh to overtake him with Andy finishing up in the lead and Milly 2nd, Rory not far behind in 3rd place.

Overall, despite the tricky wind conditions, the weekend was very successful and very enjoyable for everyone I think. A special thanks to Crewsaver for providing the prizes.  Many thanks go to Northampton Sailing Club for their hospitality and the galley staff for the food at lunchtimes, and on evenings.
I hope to see you all at the Europeans in Poole and/or the Nationals at Itchenor, they should be brilliant events as well!