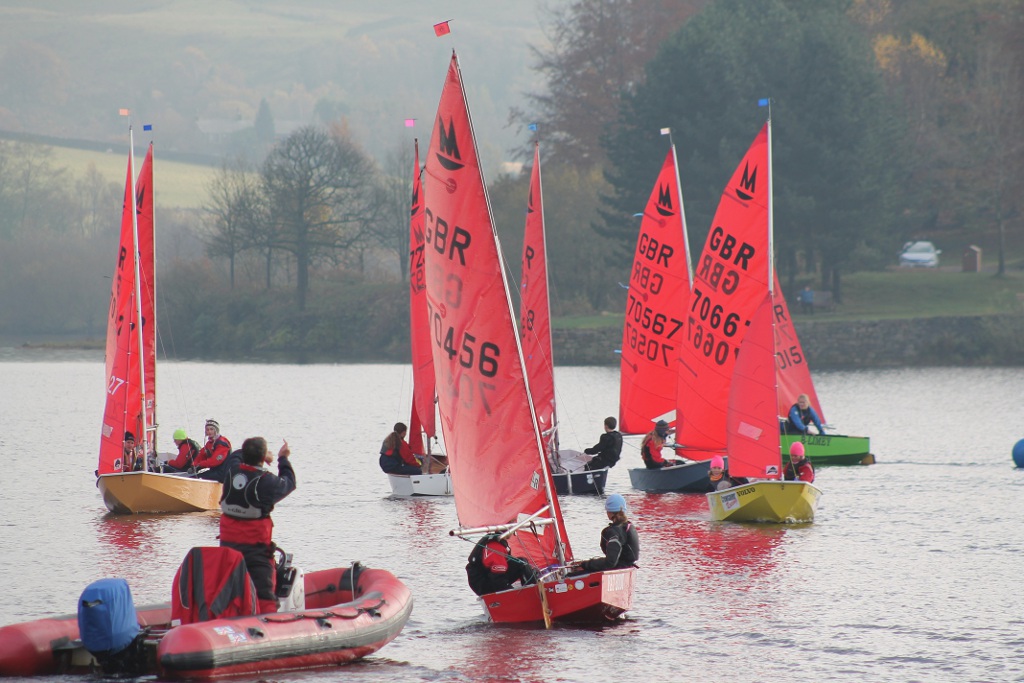 The weekend of the 10th & 11th of November saw the first of the Mirror National Youth Development Squad sessions in the North.  It was held at Hollingworth Lake Sailing Club, the home club of Stuart Bithell, who started sailing mirrors at Hollingwoth Lake and ended up at the Olympics.

With this in mind we started our first days training. The pre-briefing bacon butties were great and much appreciated, as most of the squad had already been travelling and rigging boats for quite a few hours.

The morning briefing started at 0930, where we received our squad folders and new squad jackets, which I’m sure will be the envy of all other squads (a big thanks to Neil Pryde Sailing for that one). After some introductions and ice breaking exercises we were briefed for our first on the water exercise.

Under the watchful eye of our three coaches we took to the water for a race. Following an excellent start April & Megan in Instant Custard got out in front before being chased down and pipped at the post by the very experienced Emma Grayson, sailing with Ben Settle in B-limey. We then had an intense game of round the clock, with all thirteen boats pushing hard for position.

After a late lunch of Pasta Bolognese and drinks produced by the squads in house Nutritionalists we went back to training.

Before taking to the water we had a review of the morning including photos, video footage of the morning and some great help and advice from the coaches.

We were then briefed on the afternoon session which was based aimed at improving our close boat handling.
We set off on a tough programme with follow my leader in two groups, one boat length apart, the emphasis on speed control. We moved from this on to progressively faster roll tacking on the whistle, followed by gibing on the whistle.
A series of reverse races then took place, where every time a whistle blew the front boat became the last and the last the first.

All sailors returned to shore suitably tired for the review and days de-brief.

Fish and chips were ordered in from Hollingworth Chippy for those who could stay for the evening meal. Hot Choc and cordial flowed for the sailors as the adults had to make do with a little white wine followed by fine cheese and port. A grand evening was had by all.

After the obligatory bacon butties, some with hash browns and egg as recommended by the squads in-house nutritionalists, Sunday PT started at 0900 prompt !!.

PT was led by Ex PE Teacher and Judo Champion Matt Grayson. The whole squad was led through a series of exercises and stretches to and enhance core strength and mobility in the boat.

This was followed by the morning briefing and the first on the water session.

After a warm up race the emphasis was on mark rounding. The aim being to round the mark with sails the full and drawing, the controls set right and the boat trim and balance correct. Perfection was awarded with the much sought after prize of being allowed to take a ‘Tesco Value’ chocolate éclair from Head coach Dave Woodheads outstretched hand as he sat at the Mark.
There was a surprising amount of success with the éclairs before the squad moved on to a full session of gut buster to work off some calories.

The Squad then returned to the Club for a review and video footage of the morning exercises, before a lunch of Al-Dente Potatoes (as recommended by the RYA), mince and veg.

Thanks to Helen Thornley, Matt Grayson & Dave woodhead for taking and letting us use the photos.

The afternoon saw the first of the NEIL PRYDE RACE SERIES. Where every race counts as there are no discards permitted in this hard fought 6 week series. After three hard fought light wind races, the whole squad seemed well matched.

A BIG THANK YOU

The first weekend could not have been a greater success.
We would like to thank: