In response to a number of requests (and even nags...!) here is a set of sketches showing how the spinnaker pole self launcher on Juliette and Hannah's boat works. Hannah is an ace crew but as you will know from the Times feature about her, she only has one arm so this system needs to work well, and it does. 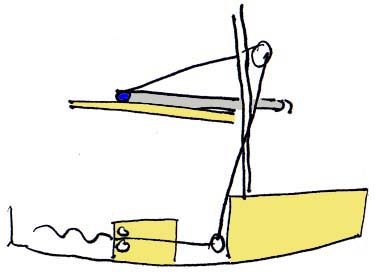 In this sketch (above) you can see the principle of the system. A conventional jaw on the outboard end of the pole takes the spi guy (it needs to be put in physically by the crew). Pulling a rope on the plate case side pulls the inboard end of the pole out to the block mounted on what was formerly the old pole loop on the mast and that's it. Some people have the haliard and pole-outhaul on opposite sides of the plate case so that you can pull them together with one hand. You don't seem to need a special fitting on the mast (they're expensive) because, mostly when the spinnaker is set it's pulling away from the mast and when it isn't, it still seems to work fine. The setup on the mast is shown below: 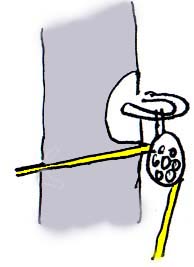 ...and we use a small Harken block that incorporates a swivel shackle. It is pretty important to minimise any friction in the system (use roller bearing blocks - Harken or similar) as pulling the pole out fast is essential when the wind is up and the kite is still down...

The sketch above shows the other end of the spinnaker pole (the one that ends up at the mast not the one that ends up holding the guy). With a normal diameter alloy pole you can fit a largish rope stop end (the plastic things chandlers sell for not too many pennies) with a single self tapping screw. Out of the hole in the middle comes an elastic - the return elastic (see below) and the rope that goes direct to the pulley on the mast that we talked about above.

...unless you want to loose an eye and / or develop big biceps, the elastic that pulls the pole back home onto the boom needs to have plenty of length in it and not be longbow taut. You can (just about) see where the length goes in the diagram above, which is looking down on the boom.

Finally, there are a few detail things to know. When the pole is set it will need (as with a conventional pole) a rope to stop it swinging too low and a rope plus elastic to stop it bouncing too high. The lower rope with an elastic element of course should bump up against any knot or stopper just about as the pole is set so that it is all fairly solid.

With a one ended pole you need to put these uphaul/downhauls on the outboard end of the pole and this means you will need to attach the uphaul higher up the mast that is usual. You need to fiddle a bit with the boat on its side to guess this right, but the pole needs to end up set so that the measured distance shown in the sketch below is about 47" - 49" up the luff of the jib, as you can see: 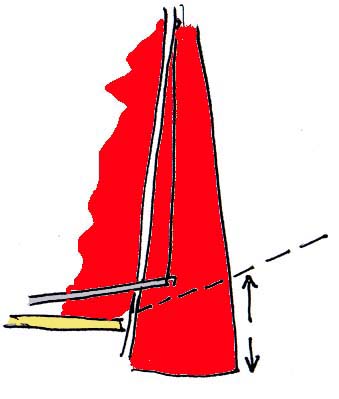 To gybe you uncleat the pole rope on the plate case, gybe, take the old guy off the pole end (doing this after the gybe seems to stop the spi blowing inside the jib), replace it with the new guy and set (marking the sheets with whipping twine will help a fast set).

You will find gybing a little slower, setting as fast and dropping blindingly quick (sort the guy end after the drop and mark rounding)

Below is a Quicktime movie (you should have the plug-in installed, normally) of a spi hoist with this system taken from a BBC TV Look East feature about Juliette and Hannah. If you have a monitor capable of thousands of colours, use them, the movie looks prettier!

(Editor's note - there is now some additional information on flyaway pole systems which includes dimensions, fittings and other developments.)