There have been 4 all GRP Mirrors produced in the UK over the years. They are, in order of appearance: 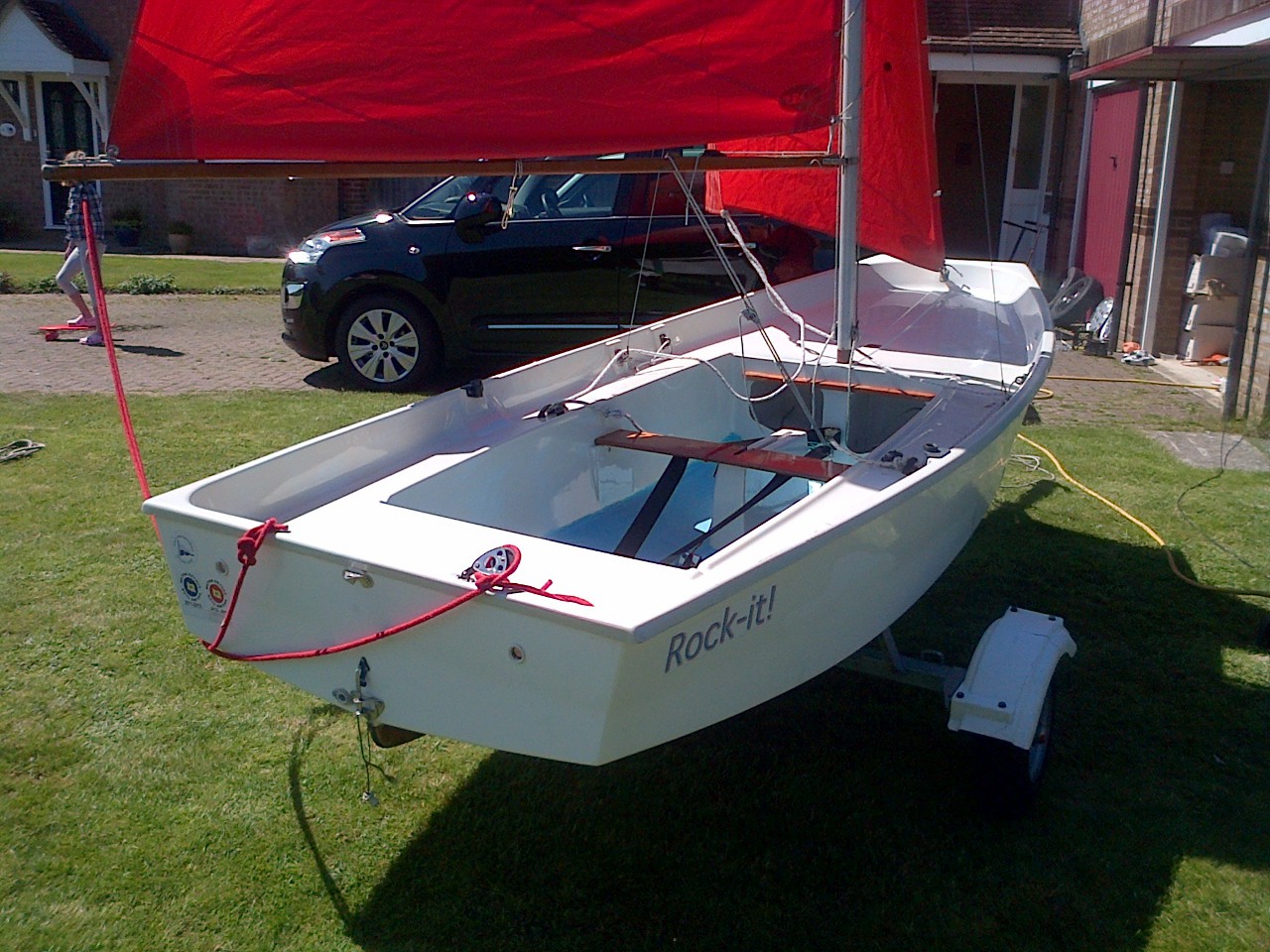 I am still trying to piece together the exact history and provenance of early GRP mirrors such as the one above. We know Bell Woodworking started producing a GRP boat moulded by Ferranti in March 1986. However, the boat shown above, and others I have come across differ from the Bell/Ferranti boat in some important ways. One has a sail number dating to 1979, another to 1985 so pre-dating the Bell/Ferranti boat. I'm now of the view these were built by Holt (who were also Licence holders). We know that Holt made 70 GRP composite Mirrors (GRP hull, wooden interior) around the early 80s (again, exact dates are unknown), so it would be logical for them to have made an all GRP version. They are quite similar to the Bell/Ferranti with very rounded corners inside the hull where the topsides meet the aft and the bow transoms, following in plan view, the profile of the normal bow shapes and quarter knees. Constructed using chopped strand mat. Similar deck layout to most wooden Mirrors (i.e. Mk2 interior) but no inner gunwales, no bow shapes or quarter knees.The differences between the Holt boat and the Bell/Ferranti are: 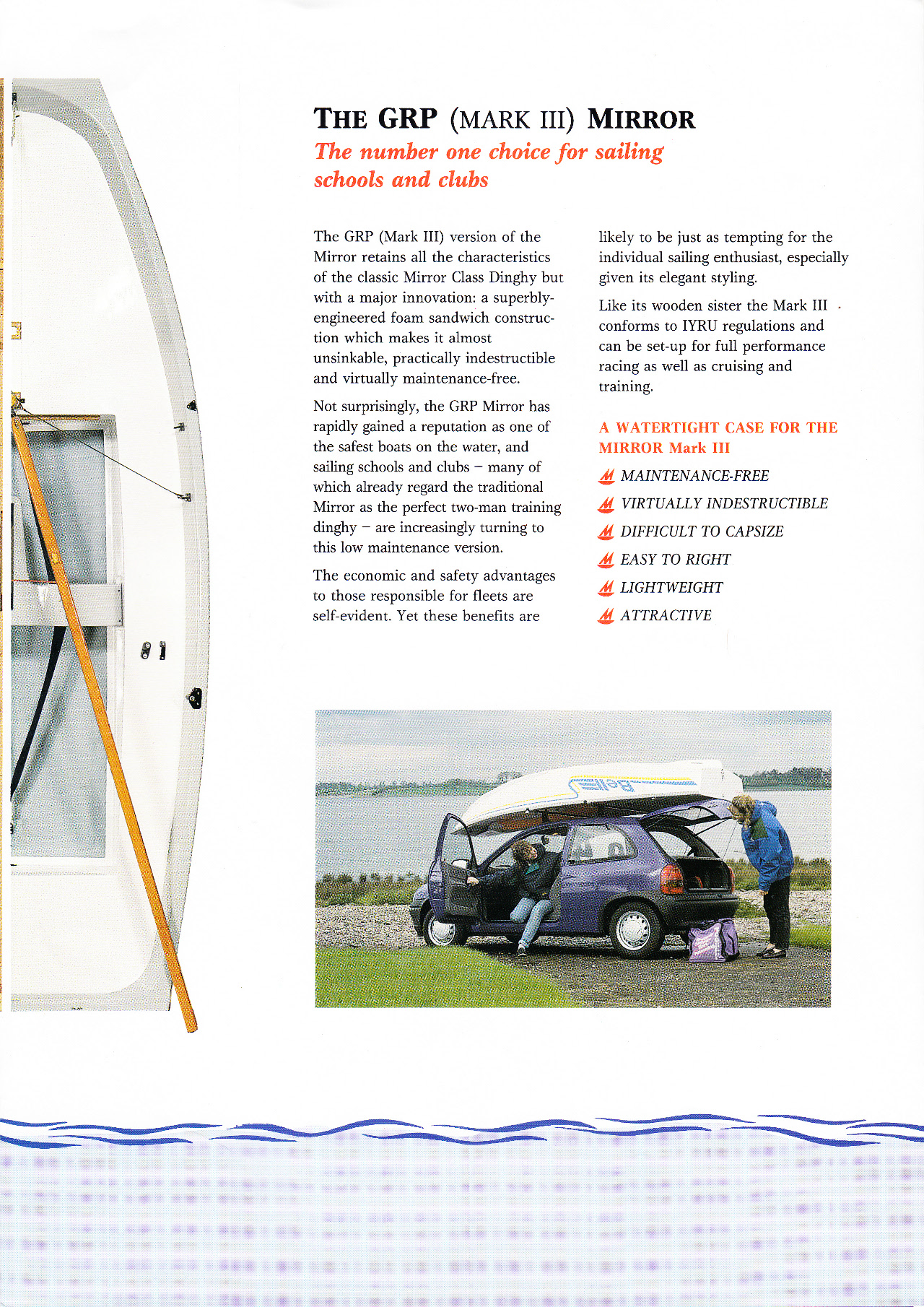 These GRP Mirrors were produced in March 1986 for Bell Woodworking by Ferranti. Just after, it would appear, Holt started to make an all GRP Mirror. At that time sail numbers were 68076 and above. They are easy to spot, they had hollow topsides (i.e. the hull sides above deck level) and very rounded corners inside the hull where the topsides meet the aft and the bow transoms, following in plan view, the profile of the normal bow shapes and quarter knees. Constructed using chopped strand mat. Similar deck layout to most wooden Mirrors (i.e. Mk2 interior) but no inner gunwales, no bow shapes or quarter knees.

Some of the buoyancy tanks may be connected via the hollow topsides (one boat had the bow tank connected to the stern tank !). The drip rail above the cuddies are wood.

From 2002 until 2007, this was the only game in town if you wanted GRP, so quite a few made and the "Mirror Race" version was pretty well down to weight, stiff and on the pace with the best wooden boats. Dave Gebhard won the 2002 & 2004 European Championships in one of these boats.

In 2006 the International Mirror Class Association asked Phil Morrison to restyle the interior of the Mirror dinghy for GRP construction. The result is known as a Mk 3 interior which has no cuddies, dished decks, curved bulkheads, a raised platform for the mast step, and wrap over gunwales. The requirement for a hole in the skeg was also removed so the skeg could be formed as part of the hull mould. The result is a boat which can made from just 3 moulds - hull, deck and thwart/daggerboard case top.